skip to main | skip to sidebar

Endangerment of the village Čunovo (Slovakia) by lateral erosion of the Danube River in the 18th Century.

Analysis of old maps enabled reconstruction of extremely dynamic channel changes of the Danube River along the part of its Slovak reach at the end of the 18th century. Prior to 1790, rapid development of a new Danube meander 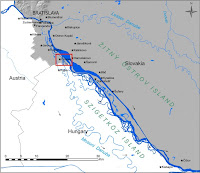 led to partial destruction of the small village Čunovo near Bratislava. Stone groynes were constructed to protect the undercut banks and to divert the flow into the new channel. Retreat of eroded banks at Čunovo over the periods 1783-1790 and 1790-1794 reached up to 432 and 229 m, respectively. Corresponding maximum rates of lateral erosion 57-72 m per year and/or 31-76 m during a single event are comparatively high in Central European conditions. Initiation and rapid development of the new meander were related to 1) increased river activity during the last onset of the Little Ice Age period, 2) serious channel changes after 1760 on the immediately upstream reach from Bratislava to Rusovce, 3) siltation of the Lesser Danube, but also to 4) local predisposition of the floodplain topography.